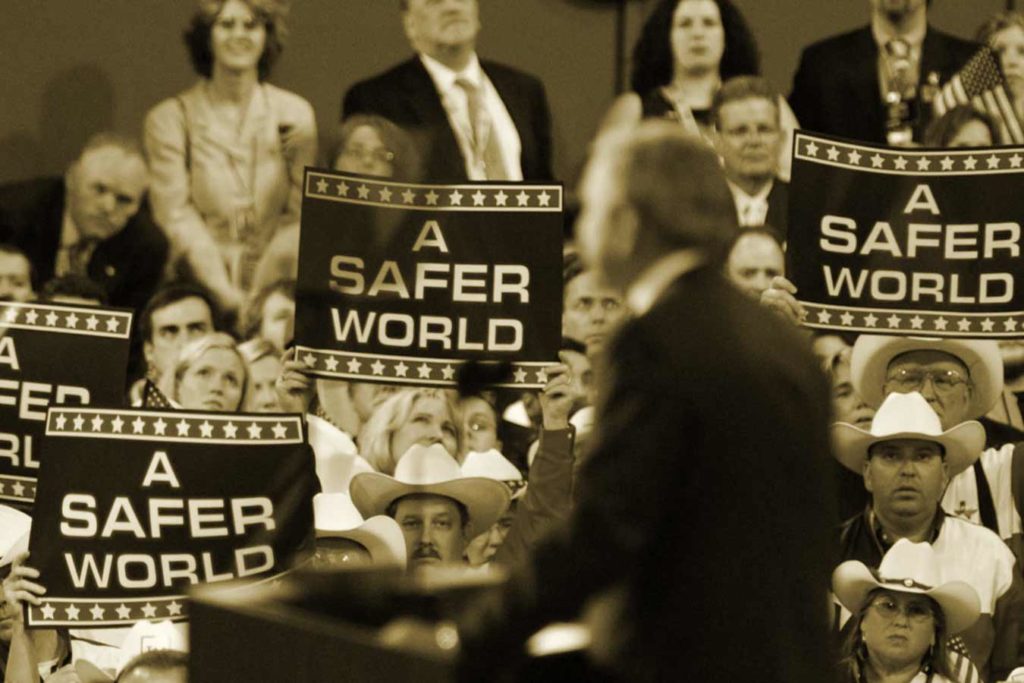 Day Five: Love is in the Air

George speaks, the people swoon and protesters protest on. Day five of my 2004 Republican National Convention coverage for MTV News.

In 2004, I returned to the United States from Saudi Arabia in time for the Republican National Convention.1 MTV News hired me to cover the spectacle. Below runs day five of my five-day diary, recently rediscovered on a long-abandoned hard drive. More: The rest of this adventure can be read here.

There’s a man behind me. He’s yelling and screaming and whooping and hollering.

His man George W. Bush is on stage. And if I didn’t know it before, this is what I know now: George W. Bush is the most competent, honest, moral, determined, resolved, singled-minded, compassionate, strong, decisive, forceful, clear-sighted, confidant and optimistic leader in the entire world.

And then some. Possibly ever.

With his vision, perseverance, grits, guts and indefatigable determination, he will also protect me and you and our parents and their parents and our children and their children from unspeakable horror. Or terror, as the case may be.

The man simply does no wrong and when he says, “I will never relent in defending America whatever it takes,” the love is palpable.

It is a strong vigorous love, a muscular love, a manly love that erupts through Madison Square Garden. Pessimistic girlie men need not apply. Which aside from Zell Miller is what Democrats are all about.

Because aside from Zell Miller, this is what I’ve learned about Democrats: they’re weak, whiny, panty-waisted, effete, dishonest, ignoble, lying, sneaking, deceptive, ignorant, two-timing America haters who believe the United States is what’s wrong with the world.

Then there’s this layer of scum that also pollutes the country.

They’re called Trial Lawyers and they’re the reason healthcare is so expensive (loud cheers), and they’ll be dealt with so they don’t continue to corrupt the country (louder cheers). With George W. Bush in charge, he tells us, there will be “judges who know the difference between personal opinion and the strict interpretation of the law” (standing ovation, cheering, slaps on the back).

They play a video before Bush takes the stage. It shows him in New York City after 9/11. It shows him down at Ground Zero with the firefighters. It shows him dressed in a bulletproof vest tossing out the first pitch at a Yankees game. It shows him, well, who cares anymore because, damn, I love the man.

I think this is what they call indoctrination. You just kind of forget everything that you thought you once knew and go along for the ride. And on this ride, I’m learning that George W. Bush and company are making the world safe for liberty, democracy, the spirit of individuality and the opportunity for prosperity and stability.

I mean, aside from his bungling on matters that right honest people can disagree on, like, say, waging a war on false evidence when your enemy happens to still be hunkered down two countries over and a few thousand miles to the east, what’s the problem?

Sure, we can go negative and point out that the billions we dump into Iraq are draining resources and human capital from the true fight. We can say it’s diverting resources from developing homeland security. We can say all sorts of things.

But that doesn’t make us feel good.

“You are involved in a struggle of historic proportion. Because of your service and sacrifice, we are defeating the terrorists where they live and plan, and making America safer… Because of you, the world is more just and will be more peaceful. We owe you our thanks, and we owe you something more. We will give you all the resources, all the tools, and all the support you need for victory.”

So Bush talks about education stuff and tax stuff and social security stuff and health insurance stuff and counter-terrorism stuff. All this stuff that he plans to do when elected for another four years.

But it’s like he hasn’t even been president yet because aside from some talk about children not being left behind and a tax cut and some prescription drug coverage, he’s not talking about what he has done. He’s not running on his record.

Except for war, which in this place has nothing to do with squandering opportunity, resources and good will. Here it’s about all the success that’s been going on.

“Four years ago, Afghanistan was the home base of al-Qaeda, Pakistan was a transit point for terrorist groups, Saudi Arabia was fertile ground for terrorist fundraising, Libya was secretly pursuing nuclear weapons, Iraq was a gathering threat, and al- Qaeda was largely unchallenged as it planned attacks,” says Bush.

“Today, the government of a free Afghanistan is fighting terror, Pakistan is capturing terrorist leaders, Saudi Arabia is making raids and arrests, Libya is dismantling its weapons programs, the army of a free Iraq is fighting for freedom, and more than three- quarters of al-Qaeda’s key members and associates have been detained or killed. We have led, many have joined, and America and the world are safer.”

I mean, where do you even start. Afghanistan? We bailed when Iraq became the new shiny object. Kharzai might rule the capital but elsewhere in the country it’s warlords, guns and poppy fields.

Yes, we’ve caught some terrorists but there’s a lawless region in the north that’s a breeding ground for more.

Yes, some alleged terrorists have been caught and killed but another generation is ready to take their place. Shortly after I left there last January a poll came out saying that a majority supported Osama Bin Laden. While not necessarily his tactics, they’re down with the agenda.

I’ll give Bush a pass although I don’t think it was war in Iraq so much as Qadaffi changing tact and coming into the fold.

Because with American troops stretched thin in Iraq, and its international reputation somewhat of a laughing stock, do you really think the Irans and Libyas and North Koreans of the world are really concerned about military conflict right now? Iran and North Korea see an opening with a preoccupied America and are making a beeline to the nuclear end zone. Simple as that.

Because Iraq. Sweet, sweet, debacle that is Iraq. Where does one even begin so that it doesn’t sound trite? Maybe that’s the point right there. Criticizing the whole thing has turned into such a cliché that it’s almost embarrassing to begin.

So I don’t and won’t. Instead, I head outside and outside’s a blast.

I’m walking downtown and on 8th Ave between 28th and 29th Street it’s the same as when this all began last Sunday.

There’s dancing and prancing and the police barricade the people off. Accordions and trombones and trumpets and drums and saxes play. A sign saying “It’s Your Stupidity, Stupid” sways in the air. There are a couple hundred people. I’m told it was a lot more an hour ago but people are tired. It’s tough to keep your protest up five days running.

And then I see something that makes me smile. It’s a cardboard sign.

But there’s a big world out here that couldn’t take it if he sucked more.