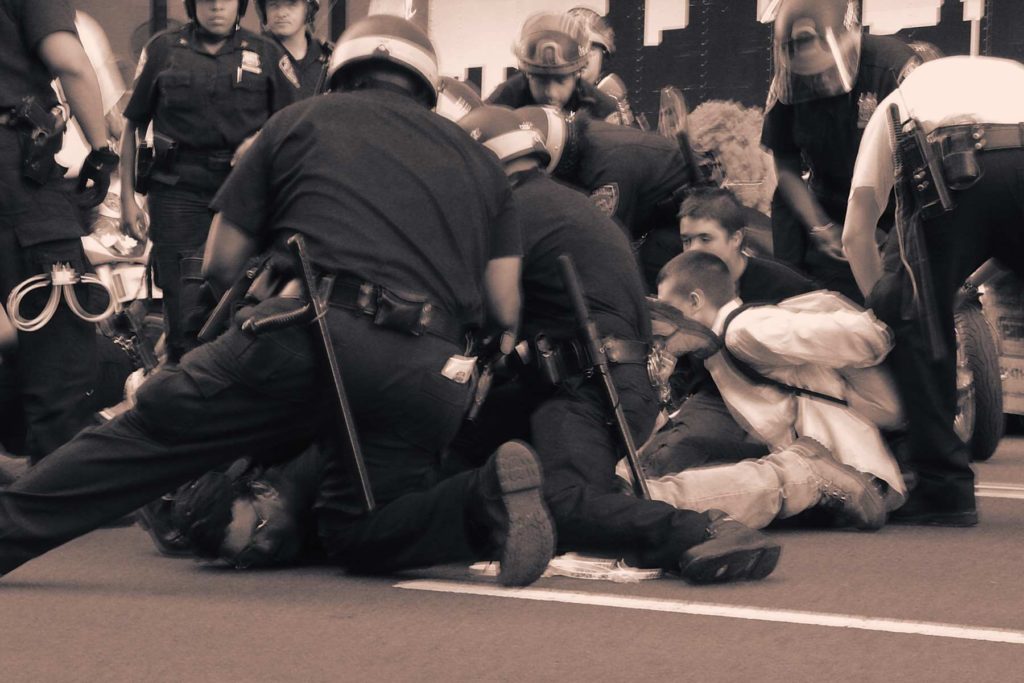 Day Three: Fishing for Girlie Men – The Police Strike Back

Arnold Schwarzenegger explains the difference between Republican manly men and the girlie men the NYPD are rounding up in the streets. Day three of my 2004 Republican National Convention coverage for MTV News.

In 2004, I returned to the United States from Saudi Arabia in time for the Republican National Convention.1 MTV News hired me to cover the spectacle. Below runs day three of my five-day diary, recently rediscovered on a long-abandoned hard drive. More: The rest of this adventure can be read here.

Know when you’re watching a National Geographic special and the little gazelle is separated from the pack and is trying to make a run for it? And there’s like four or five lions that make easy sport of it all?

That’s what I’m watching right now. We have police. We have protesters. We have a truism:

Trap someone and they will struggle. No one goes willingly.

Think of 42nd Street between Fifth and Sixth Avenues as our Serengeti. It’s a little after six in the evening and police siren about. On the corner of Fifth is the New York Public Library and on the library’s terrace are 120 or so activists.

Unfortunately, police already arrested members of the War Resisters League today. Members were marching up from Ground Zero, hoping to do a “die in” somewhere near Madison Square Garden. Never happened. Police rounded them up pretty much from the get go.

And direct action doesn’t seem like it’s really going to happen here. A bunch of cops are rolling out orange nets. They’re unspooling them down the street alongside protesters and whoever else happens to be walking down the sidewalk.

This is human fishing. The police pinch their nets to trap everyone on the sidewalk inside of them. Those who are trapped and those doing the trapping both seem a little surprised that it’s actually working. And in that moment where everyone is just a little surprised, a ton of people walk, hop and jump out of the gaps and slacks in the nets and continue on their way.

So people move forward down 42nd Street towards Fifth Ave. A new team of cops comes running down the curb unspooling orange nets. These guys are good. Better than the last. And if you watch people coming out of the subway stations that are literally right here, you can see how thoroughly confused they are about what the hell they’ve just stepped into.

Some are freaking out. They yell in any and every direction demanding to know what’s happening.

Think about it. You’re minding your business, thinking whatever you’re thinking. It’s the end of the day and you’re heading home to crack yourself open a fresh one. You walk out of the subway and you’re wrapped up in a fluorescent orange fishing net with a bunch of punky kids.

The nets close around us. The police pull them tighter to pack people more closely together. I’m nose to nose with a guy in a suit. He’s going ballistic, like he’s in a bad dream being treated like so many are treated but not like he’s supposed to be treated, or those he knows. He sees my press pass and asks what the hell is going to happen? I have no idea.

Think of it. You’re a scrawny little dude trying to make a run for it and a bunch of manly men start piling on top of you. Forget it. This National Geographic special has one possible ending and it’s a painful one.

Dude gets the shit kicked out of him.

It’s a blur of blue bodies and big fists raining down on him.

When he’s cuffed and on his feet he yells out, “Legal! Legal!” hoping someone’s around who can take down his name and maybe help him out. Before anyone can he’s pulled behind a wall of cops and disappears.

Others are arrested too. We’re penned in by this net. The cops scan faces, point towards one, say, “That one,” and a bunch of cops jump in and drag out whoever that one was.

When I’m finally out a police spokesman says they arrested about 40 people. He says that they were blocking pedestrian traffic on the sidewalk.

I ask how. He says that they were sitting and wouldn’t move. I ask if he has another story because I was walking down the street with these people and I didn’t see anything like that. I did see a lot of hoarding and rounding up by the police, I tell him, but, as far as I saw, there was no sitting and blocking.

“Look,” he says, “I just got here myself. You probably know more about this than I do.”

I know what I saw but don’t know what I didn’t see, I say, and go talk to a woman named Sky to see what she saw.

She says that they were at a reconvergence meeting at the public library and left to go march. When they got to the corner of 42nd and 5th they were told to stop because if they tried to cross the street they’d block traffic. So they stopped. And waited until they could cross the street. And then the nets came. And then all hell broke loose.

Which is pretty much what’s still going on right now. A group of activists are plopped down in the middle of the street trying to block a maroon van from bringing the evening’s catch to central booking. They’re singing solidarity songs and start chanting, “We’re political prisoners. We’re political prisoners,” when they get arrested.

I leave to head down to the Republican National Convention at Madison Square Garden. It should be in full swing by now. There’s a guy yelling at the cops.

His voice fades as I walk away. Just outside of Madison Square Garden is an entirely different police scene.

Cops are pointing people in one direction or another with a smile, directing traffic, standing around. Things are locked down with various checkpoints here and there, and dogs that sniff at people crotches. It’s so very respectful and helpful. This is what it’s like when the police work for you and not against you.

I can’t say whether that’s good or bad. It’s more just, well, weird because I can’t tell if it’s a proclamation or a reassurance that those gathered here are good people.

At least that’s what Kansas Senator Sam Brownback is saying.

More important, President George W. Bush is a man of action who promises results and then delivers results (so says Secretary of Education Ron Paige). This gets good applause but when the true action hero of the night shows up, the crowd goes wild.

Arnold Schwarzenegger is a large man. He radiates largeness and a previously flat, somewhat sleepy Madison Square Garden is rocking for the first time tonight. I’ve never heard him do his thing and he does it really well. He talks about growing up under the threat of the Soviet Union and being stifled under Austrian Socialism. He talks about coming to America and inhaling freedom. He talks about how liberating that experience was.

Something else he talks about is why he’s a Republican and why others should be Republicans too.

I’m about to jump out of my seat to join the party. Give me a form to sign, some apple pie and I’m all yours. I’m digging the red meat and potatoes of all this.

Except, and color this an irony, if not a full-blown oddity: this is exactly what the activists getting arrested on the outside have been talking about.

Seriously. Better education. Individualism and freedom. Banish the hegemony of special interests, especially the international corporations. Maybe there can be an outreach between Schwarzenegger Republicans and Anarchist Collectivists. They might just get along.

But that’s not the point. The point is that Arnold beams and the crowd roars and Arnold tells the convention hall that critics who speak so pessimistically about the economy shouldn’t be such girlie-men.

This is the unspoken programming note for the evening: let there be manly-men talking about manly things in a manly way.

The crown loves it. Manly-men knocking girlie-men and their sensitivities brings the house down. I’m laughing too and look about for some manly back to slap in camaraderie.

Then I think about the fact that I don’t have a job. Well, I don’t have one aside from the little stint that got me inside here to write about not having a job.

It dawns on me that I might not be manly but if I was, I might have a job, and some of that health care they’ve been talking about too. I might have all these things and then I too could call people who complain girlie-men and feel a righteous self-satisfaction in doing so.