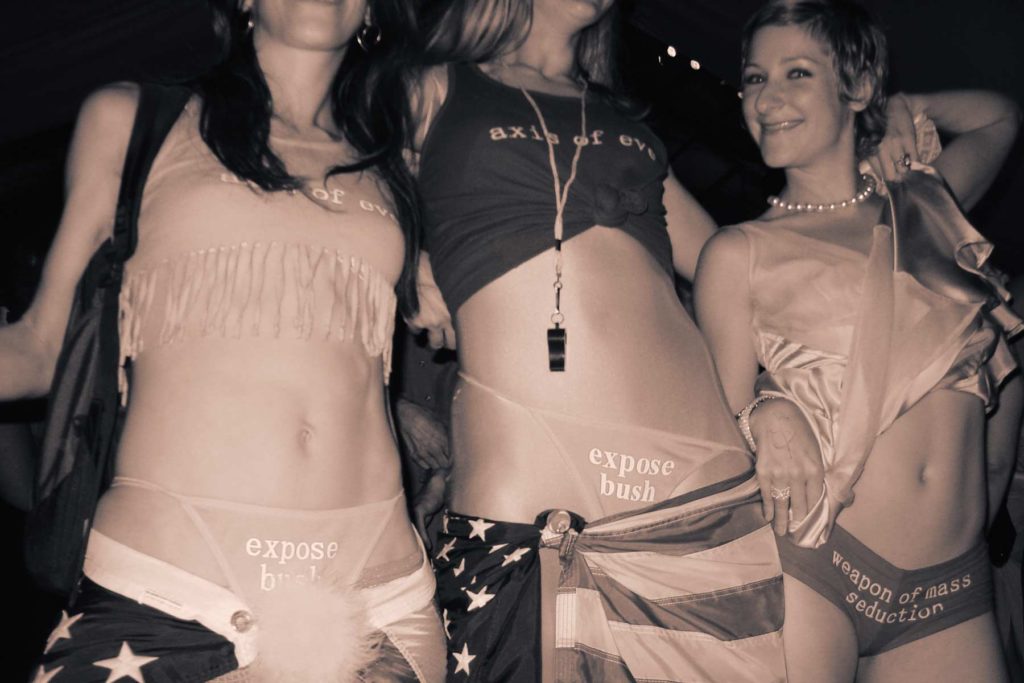 In 2004, I returned to the United States from Saudi Arabia in time for the Republican National Convention.1 MTV News hired me to cover the spectacle. Below runs day four of my five-day diary, recently rediscovered on a long-abandoned hard drive. More: The rest of this adventure can be read here.

I think I’m watching someone having a breakdown. Or maybe I’m in a time warp. This all sounds like a cold war caricature from the 1950’s. No, it’s definitely a breakdown. Or quite possibly a meltdown.

“Now, while young Americans are dying in the sands of Iraq and the mountains of Afghanistan, our nation is being torn apart and made weaker because of the Democrat’s manic obsession to bring down our Commander-in-Chief.

“What has happened to the party I’ve spent my life working in?”

I want to raise my hand, stand up and say, There’s this thing called an election, it’s actually why we’re all gathered here tonight. The Republicans are trying to re-elect this guy named George W. Bush and the Democrats have their candidate. His name is John Kerry. What’s going on here is that the Democrats want their candidate to win. So, too, the Republicans. And if I have my junior high civics lessons right, this happens every four years.

I’m not raising my hand but Miller’s still going at it:

“Motivated more by partisan politics than by national security, today’s Democratic leaders see America as an occupier, not a liberator. And nothing makes this Marine madder than someone calling American troops occupiers rather than liberators.”

Now I really should raise my hand because the very self-same Republican nominee, this guy George W. Bush said in an April press conference that the Iraqis aren’t happy that they’re occupied. He even went on to say that he wouldn’t be happy if he were occupied either.

So I really don’t know what Zell’s really talking about but the faithful around me are hooting and hollering and generally making all sorts of high-five happy gestures. One of the Democrats’ own is sticking it to them and they love it.

There’s this weird suspension of belief at events like this. You’re with the faithful. The faithful are strong, happy people talking about all that is good and right and necessary about what they believe in. The detritus of your mind is wiped clean and you become an open vessel for whatever is poured into it.

“Listing all the weapon systems that Senator Kerry tried his best to shut down sounds like an auctioneer selling off our national security,” Zell says, “but Americans need to know the facts.”

As I said, you sit here in Madison Square Garden with people roaring their approval and your mind kind of goes dead. You can’t for the life of you escape the spin unless you’re fortunate enough to have a little bit of a pinprick and you think to yourself, What they hell is this man talking about?

There were never any votes to eradicate these weapons systems; and wasn’t this the early 90s we’re talking about when there was this thing called the peace dividend? And wasn’t Vice President Cheney defense secretary for the first President Bush? And didn’t Secretary Cheney lambaste the Democrat congress for keeping these systems operable? Turns out he did.

Testifying before the Senate Armed Forces Committee on January 3, 1992, Cheney told congress that he had enough M1’s and F14s and F16s and that the country didn’t need any more.

So what did Kerry do? Pretty much the same thing. He opposed defense appropriations bills that included funding for some of these systems along with a host of other expenditures.

But that doesn’t really matter because in the world according to Zell, a Kerry presidency means that the United States Armed Forces are going to be defending themselves with spit balls and squirt guns.

The crowd roars. They love this man.

Me? I’m feeling kind of twisted so I leave Madison Square Garden and head downtown to the Frying Pan. This is docked boat down on Pier 63 at 23rd Street on the West Side Highway.

There are two great things going on here: first is a Billionaires for Bush coronation party. You’ve got men and women dressed in tuxedoes thanking the Bush administration for keeping unemployment high so wages stay low.

Second are scantily clad women from Axis of Eve, a group made famous by their protest panties. They wear American flags as skirts, kind of tied around their hips so you can see the message on their undies.

The underwear is sassy. It’s sexy. Printed across the front are slogans such as, “Expose Bush.”

It’s all about exposing bush. Or shaving it, says one of the Axis of Eve founders I’m talking to. It doesn’t really matter which so long as George W. Bush is exposed. She’s a Ph.D. candidate. She thinks hard about these things.

In the background is the Hungry March Band. They’re a slew of tubas and trumpets and saxophones and drums blaring all sorts of Baltic hoopla. A friend of mine from Bulgaria is here with me. “What the hell does the Balkans have to do with presidential elections,” he asks.

Can’t say I really know. But it has about as much to do as a Democratic senator from Georgia repenting to the Republican faithful up at Madison Square Garden.