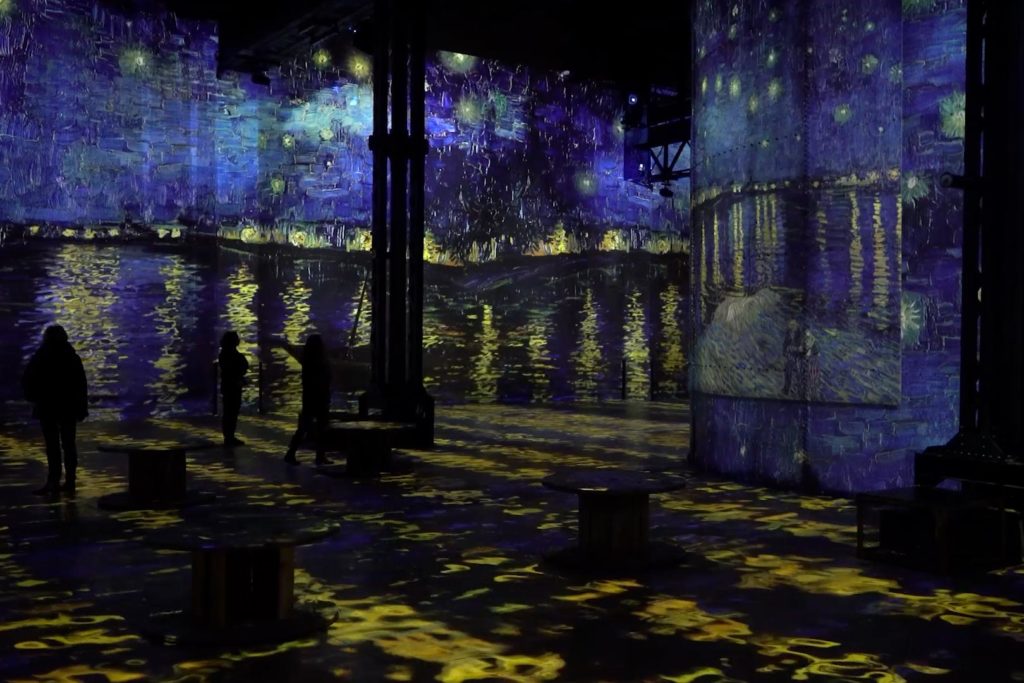 A new Van Gogh exhibit has us wondering what the future of the museum might be.

“People do not learn about culture as they did in the past,” claims Bruno Monnier, the founder of a French museum management company that creates massive digital art installations. “The practices are evolving and the cultural offering must be in step with them.”

What you think of how Monnier and his company Culturespaces put this idea into practice likely reflects how you view “fine” art, its reproduction, and whether we need to transform “serious art” into popular entertainment in order to reach the general public.

The museum is a digital playground that transforms classical Western art into immersive experiences. Using interactive light, sound and video laser projectors, exhibitions are a type of virtual reality without the need for a headset. Hundreds of thousands have walked through the museum’s fabricated world since it opened with a Gustav Klimt show in April 2018.

“The passive observation of works of art is no longer relevant,” Monnier claims in a statement attributed to him on his company’s web site, “and I’m convinced that people are increasingly learning about art through this immersive experience and the emotions they generate.”

Take the current Atelier des Lumières 3D blockbuster focusing on the life and work of Vincent Van Gogh. The exhibit projects images from Van Gogh’s work onto 10,000 square feet of surface space all accompanied by a soundscape drifting from some fifty speakers.

Here’s a brief video to give a sense of what the exhibition looks and feels like.

It’s all very trippy, and, according to Monnier, is the future of learning about cultures past. “The marriage of art and digital technology is, in my opinion, the future of the dissemination of art among future generations, as it is able to reach a younger and wider audience than that of the traditional museums.”

All this may be true. It certainly follows a tradition of popular entertainment introducing audiences to classical art. Walt Disney famously used Mickey Mouse to bring Bach, Tchaikovsky, Stravinsky and Beethoven to everyday theater goers.

But what, exactly, is it?

Van Gogh’s Starry Night is displayed at the Museum of Modern Art in New York City. Its reproduction, as a poster, on countless dorm room walls. At 29 x 36 1/4″, there’s nothing in its scale that impresses when you see it. Instead, for those of us who aren’t experts, seeing Starry Night in person is something of a reflection, a recognition, and an appreciation of a cultural artifact that gives pause when standing before it. That’s it, we tell ourselves. That’s the Thing. It’s the thing I’ve seen so many times before in reproduction while never having seen the real thing.1

Cross the ocean and enter the Paris Van Gogh exhibit and what do we have? The Starry Night aesthetic is present in a way. Elements of it – along with other seminal Van Gogh works – animate the air and illuminate surfaces. But what does it mean to understand Van Gogh’s work in a simulation? Is it to simply appreciate his aesthetic via an approximation and variation as experienced in an artificial exhibition? Is it even supposed to reference back to the static work that hangs at the Museum of Modern Art?

“This isn’t about replacing museums or art books,” explains Gianfranco Iannuzzi, Culturespaces’ Artistic Director, in a prefab interview in the Van Gogh exhibition press kit, “but rather adopting an alternative approach to art appreciation, based on a personal and sensorial experience.”

Some of what’s interesting is that unlike a reproduction, the exhibit isn’t trying to be the thing. Instead, it’s inspired by the thing, infused with it to a degree that it can’t exist without the original but is still totally alien from it. It’s immersive edutainment, culture as learned through the countries represented at Disney’s Epcot rather than the places themselves, or, finally, “an entertaining introductory approach to art appreciation” as Monnier explains in the company’s press materials.

I wonder though whether the spectacle obliterates the original. Is the experience so present that when we finally see the original, we’re disappointed. Is that it? we ask, pointing at the painting statically hanging on the wall.

Needless to say, Culturespaces plans on opening a 40,000 square foot venue in a renovated German submarine bunker in Bordeaux in Spring 2020. The public appetite for their digital recreations has them dreaming of bigger realities to create.