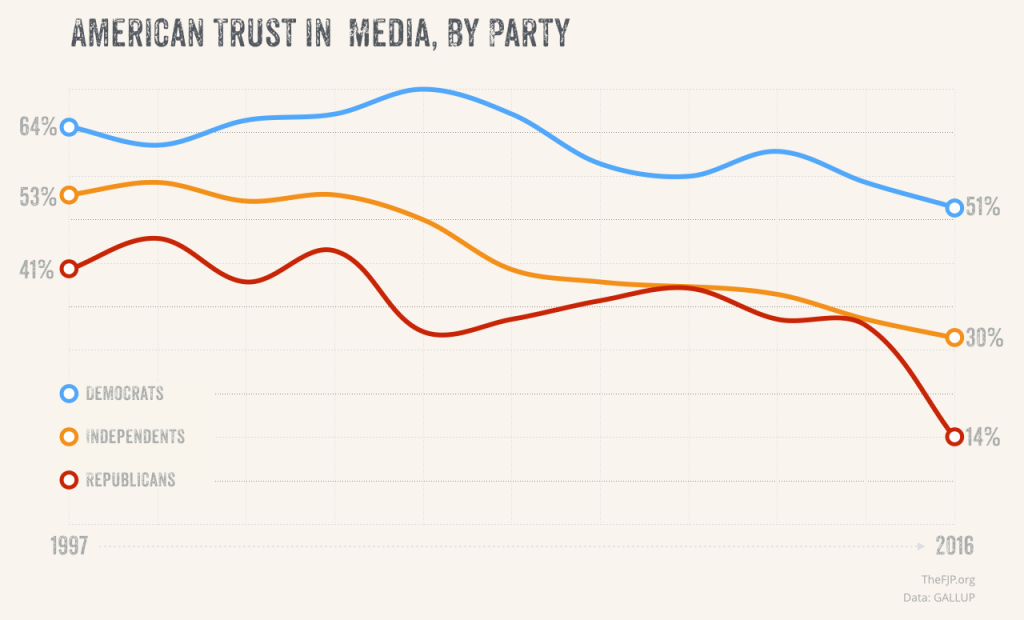 Where goes truth when a new Gallup poll indicates American trust in the media is (yet again) at an all-time low?

Back in 2009, Michael Hirschorn, reflecting on the first decade of the 21st century for New York Magazine, wrote that we live “in a media age that lacks a central authority to referee reality” where there’s a “nagging sense that the agents of chaos are now so diffuse and powerful that no central authority can counteract them”.

Welcome to 2016 where the question isn’t whether we live in a fact free age but whether anyone can mediate truth from fiction.

Fox News’ Chris Wallace rejects the notion that it’s his responsibility to fact-check the candidates when he moderates one of the upcoming presidential debate. “I do not believe it is my job to be a truth squad.” he told Howard Kurtz in a recent interview. But, if not journalists, then who?

A new Gallup poll indicates American trust in the media is (yet again) at an all time low. This is quite a blow for a journalists who believe, ostensibly, that they work for the public, that their job is, indeed, in the public interest and that “truth squadding” is part and parcel of their work.

Simply, if people don’t trust “the media” as arbiters of the truth, can or will they trust anyone outside their information cocoon? Long term trends on American faith in institutions suggest no. Similarly, studies show that people not only reject information that counters their beliefs, but will double down on those beliefs despite the fact that they’re based on falsehoods.

As a societal – and psychological – issue there’s no real solution to navigating truth and establishing basic facts. Yes, newsroom fact-checking is and will continue to be exceptionally valuable and important but if the audience distrusts those doing this important work, more needs to be done.

One starting point would be for our broadcast media to stop enlisting partisans as voices of authority in their segments and instead promote, dare I say, actual experts on the issues being debated. It’s a small step but could move an important needle despite distrust in experts to begin with.(1)

That said, let’s travel back to 2004 when Jon Stewart pleaded much the same to the hosts of CNN’s Crossfire. “You’re hurting America,” he said at the time. The same holds true today.