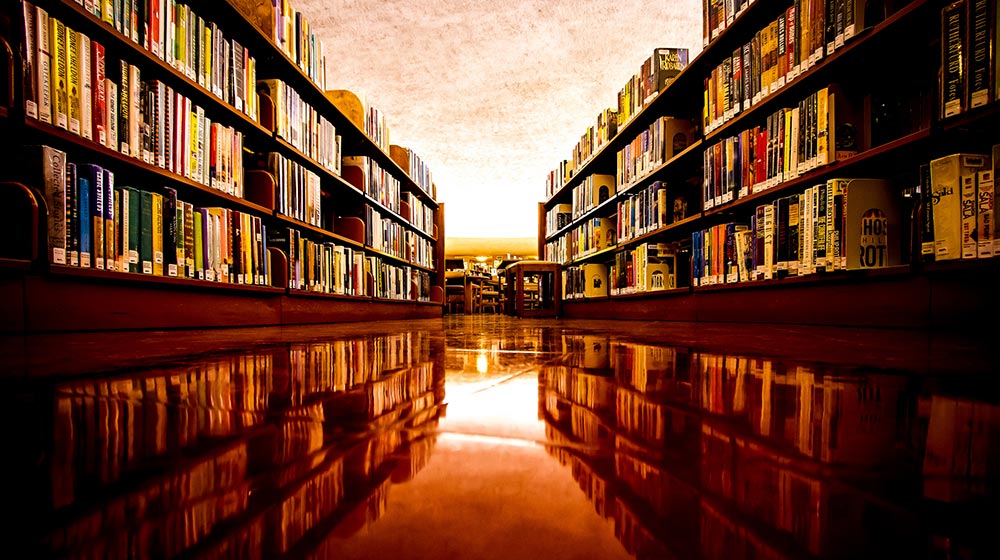 We love books but there’ve been too many for about 500 years now.

Over at The New Republic, William Giraldi explains why both readers and writers need books:

For many of us, our book collections are, in at least one major way, tantamount to our children—they are manifestations of our identity, embodiments of our selfhood; they are a dynamic interior heftily externalized, a sensibility, a worldview defined and objectified. For readers, what they read is where they’ve been, and their collections are evidence of the trek. For writers, the personal library is the toolbox which contains the day’s necessary implements of construction—there’s no such thing as a skillful writer who is not also a dedicated reader—as well as a towering reminder of the task at hand: to build something worthy of being bound and occupying a space on those shelves, on all shelves. The personal library also heaves in reproach each time you’re tempted to grab the laptop and gypsy from one half-witted Web page to another. If you aren’t suspicious of a writer who isn’t a bibliophile, you should be.

But it’s not just books we need, says Giraldi, we need physical books that we can touch and smell. He doesn’t say this as a technophobe, and he doesn’t lay claim to various studies that say we absorb and understand more from the physical page than the digital screen. Instead, Giraldi argues, “like so many literary points worth emphasizing, [this] is an aesthetic one — books are beautiful.”

There’s something, he suggests, in sitting among your collection that inspires. Giraldi quotes Sven Birkerts: “Just to see my books, to note their presence, their proximity to other books, fills me with a sense of futurity.”

But what if there are simply too many books these days? Forget digitization and the volumes previously out of print but now available. This is a problem that dates back to the 15th century when the printing press was in full swing and 20 million books were printed in Europe.

We live – and have lived – in a world of “overproduction,” argues Tim Parks in the New York Review of Books.

Just when we were already overwhelmed with paper books, often setting them aside after only a few pages in anxious search of something more satisfying, along came the Internet and the e-book so that, wonderfully, we now have access to hundreds of thousands of contemporary novels and poems from this very space into which I am writing.

Inevitably, this tends to diminish the seriousness with which I approach any particular book. Certainly the notion that these works could ever be arranged in any satisfactory order, or that any credible canon will ever emerge, is gone forever. I’m disoriented and don’t expect things to be otherwise any time soon.

Disorientation, an inability to create a canon, cultural critics would call that a decentralization — or disintermediation —of authority. A subset of them would argue this is a good thing and that we live in an age of cultural negotiation.

But if there are too many books, maybe we shouldn’t read them at all. Maybe it’s easier – perhaps better – to just read reviews and get the gist.

“[W]e’ve always been shallow readers,” writes Noah Berlatsky and we shouldn’t fret that our digital screens amplify that. Our best way forward is to skim through writing about writing “and have some idea about it.”

And here’s where the Internet may truly become a boon for culture. Where else are you constantly encouraged, and even required, to talk creatively and endlessly about works you have not really read, and things you know little about?

For Berlatsky, books are a “cultural network” where it’s more important to know what a book’s generally about and how it relates to others “than to know exactly what’s in that one book in particular.”

Or, as Pierre Bayard, author of How to Talk About Books You Haven’t Read, puts it, “Being cultivated is a matter not of having read any book in particular, but of being able to find your bearings within books as a system.”

Harsh, for the book lover, to be sure. Harsh for the author too.

The book here becomes a mere data point on a larger system and understood in aggregate. It becomes, in a sense, mere metadata. Or, in a world of media everywhere, where we have what seems like infinite choice over both form and content, the book is simply being relegated to one of many choices.

Clay Shirky alluded to this a few years back:

Again, decentralization, disintermediation and cultural negotiation. This time not within a set of cultural objects, but at a macro level concerning what objects our culture holds valuable. We may not like the result but can’t deny the reality.

A UC San Diego report published in 2009 suggests the average American’s eyes cross 100,500 words a day—text messages, emails, social media, subtitles, advertisements—and that was in 2008. Data collected by the marketing company Likehack tells us that the average social media user “reads”—or perhaps just clicks on—285 pieces of content daily, an estimated 54,000 words. If it is true, then we are reading a novel slightly longer than The Great Gatsby every day.

Of course, the word “read” is rather diluted in this instance. You can peruse or you can skim, and it’s still reading. I spoke with writer and avid reader John Sherman about his online reading habits. “Sometimes, when I say I read an article,” said Sherman, “what I actually mean is I read a tweet about that article.” He is hardly alone in this.

We no longer read for knowledge, she writes, but instead consume whatever and wherever in a perpetual search for information.

The book holds out promise for more though. Let’s leave it with Giraldi:

Dedicated readers are precisely those who understand the Socratic inkling that they aren’t smart enough, will never be smart enough—the wise are wise only insofar as they know that they know nothing. In other words: Someone with all the answers has no use for books. Anthony Burgess once suggested that “book” is an acronym for “Box Of Organized Knowledge,” and the collector is pantingly desperate for proximity to that knowledge—he wants to be buffeted, bracketed, bulletproofed by books.

Image: Sucked In And Drawn Along, by Lotus Carroll.