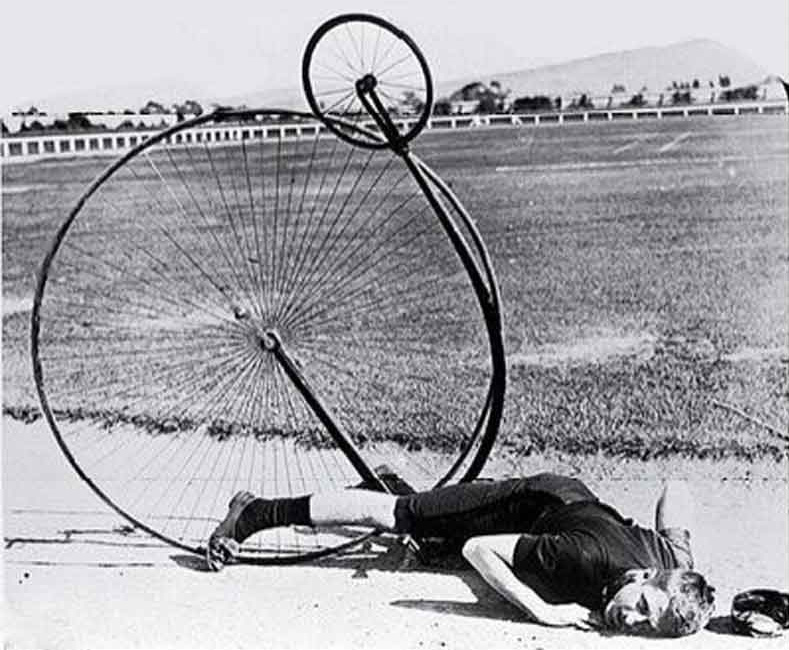 Heartfelt thanks to those who helped when I went head over handlebars while riding my bike in New York.

I bike to work. It’s become part of my thing. I leave my apartment around 7:15 and once outside I’m head down, geared out and pushing it for as long and far as I can push it.

The ride’s from Queens to Brooklyn, seven and a half miles from my door to the gym by my office where I work out and stretch for an hour, shower up and head to work. At the end of the day, I power my way back home.

I didn’t always do this. I used to be fat and sedentary. Now I’m less fat and less sedentary. My mind’s changed a lot too. It’s more facile, I can get to deeper places in it and it’s generally a happier, more motivated space than it used to be.

The first real effort on the ride is when you hit the Pulaski Bridge connecting Long Island City in Queens to Greenpoint in Brooklyn. It’s not a steep climb but it is a climb and you have to push it. It’s nice, though. There are other riders and walkers on their morning commutes. It makes for good people watching.

And in the spirit of what goes up must come down, once you hit the top of bridge — and as long as there aren’t too many people on it — you can open it up and hit high speeds on your way back down.

Which is exactly what what I did Tuesday. When exiting the bridge you’re fed onto a short stretch of access road before you bank right onto a tree-lined side street. There you enter a bike lane.

And after I banked right and entered the bike lane, I cranked up the gears and started going pretty much as fast as I can go on flat land. I looked ahead, saw that I was about 200 yards from the first intersection I’d hit, tucked my nose into the fabric of my shirt on my left shoulder to wipe the sweat off my face and then found myself flying over my handlebars and through the air.

Accidents are strange. Time grows elastic. You have time to think. Here a few thoughts I remember thinking while airborne:

And then my body hit pavement. Here are a few thoughts that went through my mind when that happened:

I rolled over and a man was running my way. I couldn’t make him out. He was very blurry. He was also yelling something. I couldn’t make that out either. When he reached me. I started to understand. “Are you ok?” he was asking.

I tried to answer but no words came out. I held up my hand, indicated he needed to give me second. “I’m trying to breathe,” I finally said.

My head was swimming, my breathing quick, I could feel my body going into shock. I tried to slow myself down by breathing as deep as I could through my nose and exhaling slowly through my mouth.

And then I passed out.

When I came to, there was a different man hovering over me. What he said I don’t know but I want to thank him too. Eventually I realized he was talking about an ambulance being near. I want to thank him and then the EMT’s who showed up, put me on a stretcher and fed me oxygen. I want to thank the cop who hopped into the ambulance with me and told me he’d take my bike down to the local precinct. That I could pick it up when I was feeling better.

And I want to thank the doctors and nurses and administrators and radiologists and CT scan technicians at Bellevue, all of whom cheered me a bit with their words while treating me. And I want to thank the woman who eventually came by my emergency room bed, told me she’s doing a three-year study on bike accidents in New York City and asked if I’d like to participate. Of, course I said. Five hundred, she replied, when I asked how many bikers had been admitted to Bellevue in the last year.

People criticize cities like New York for being anonymous places where people go about their day to day without concern for others. It’s not like that. My accident was but a blip on the scale of all human interactions that take place here every day. But the speed with which total strangers came to my aid — and come to the aid of others — is a reminder to me, at least, in maintaining faith in the inherent goodness of others.

I thank everyone from that day.